What are Web Mashups

Historically, Smart Office Mashups were just called Mashups and would run in Smart Office. Smart Office is currently the main user interface for M3, built using C# and Microsoft WPF. With the launch of Infor M3 H5 Client released about 2013, M3 can now run in HTML5/JavaScript in any major web browser (for example Microsoft Internet Explorer, Google Chrome, Apple Safari, Mozilla Firefox), in any major operating system (for example Microsoft Windows, Mac OS,  Linux, etc.), in any major device (Mac, PC, iPhone, iPad, Android, etc.). As part of that web enablement, Mashups are now automatically converted from Smart Office Mashups to Web Mashups, and they can run inside H5 Client or standalone in a browser.

To do Web Mashups, the developer creates Mashups as usual in XAML with the Smart Office Mashup Designer, and the server converts the XAML the best it can into HTML5/JavaScript, jQuery, REST/SOAP, and JSON/XML. Currently Web Mashups don’t support all the controls that Smart Office Mashups supports. I successfully tested m3:ListPanel, m3:DetailPanel, as well as Grid, StackPanel, Label, TextBox, and Button. It seems MIListPanel and MIDetailPanel are not supported. It seems Document Archive is supported. And it seems XAML’s ListView may already be supported, to be confirmed. According to the Product Manager and component owner at Infor, they are adding support for more and more controls. I expect loss along the conversion as I don’t think it’s possible to automatically convert all of XAML, Binding, Converters, and other advanced WPF tricks. But it should work fine if we stick to a specific subset of Mashups.

You can read more about Web Mashups on the Infor InfoCenter:

I’m working with Ryan, an IBrix and J2EE developer at a long-time customer, to help him convert IBrix from the obsolete Movex Workplace to the new M3 13.1 as part of their company’s upgrade. We’re evaluating the capabilities of Web Mashups, and the best strategy to do IBrix conversion. Here I’ll illustrate the basics.

That simple Mashup is good for illustration purposes as it shows records from M3 Customer. Open – CRS610, and it is made of a m3:ListPanel to show the list CRS610/B, and a m3:DetailPanel to show fields from CRS610 panels EFG:

Then, I’ll put the XAML inside a Mashup Project (*.manifest), and I’ll deploy the Mashup privately as a Web Mashup deployment target: 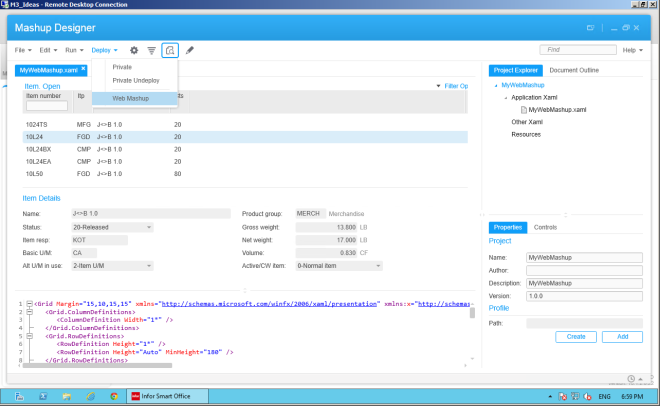 Then, I click Open, and Smart Office launches the Web Mashup in my browser at /mashup/web/MyMashup, and the server prompts me for M3 authentication with User Name and Password:

Finally, I can use the Web Mashup, it works great:

I tried the Debug to simulate a Search event with a Query parameter, but it didn’t work for me, nothing happened when I clicked Execute event, and I don’t yet know why:

You can also check the version of your Mashup grid application at /mashup/about/version, in my case it’s 10.1.0.3.23: 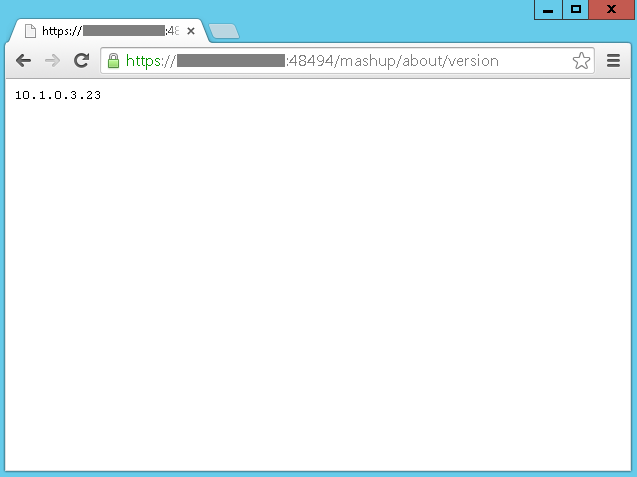 You can also go to the Administration UI and see the deployed Mashups at /mashup/admin: 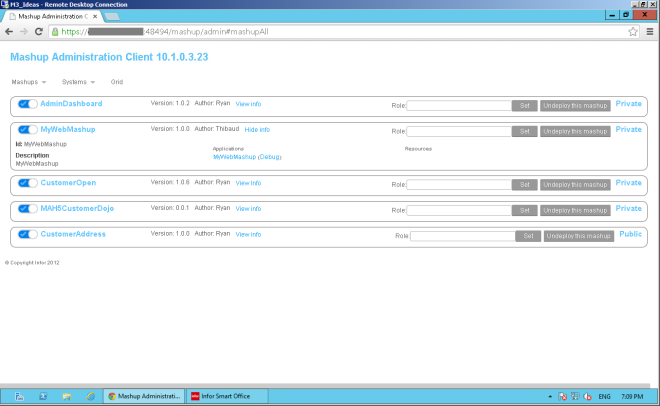 You can also generate a *.webmashup package to deploy the Web Mashup globally:

You can also see the supported controls, parameters, and events:

You can also check some of the files in LifeCycle Manager:

Also, check out the post on Web Parts for H5 Client.

9 thoughts on “Introduction to Web Mashups”