The M3 Enterprise Collaborator Partner Admin Tool User Guide does not mention anything about the HTTPOut channel (no matches found in search), but if we read the pages attentively there is a chapter Setting Up Send Channels with a section on HTTP. After some studying of the HTTPOut Java code and testing in PartnerAdmin I confirm that section is effectively referring to the HTTPOut channel. Unfortunately it is just one sentence with no substantial information, and it is incorrect in that “the content type returned” should be “the content type of the request” and in that there is no such thing as “content type web browser”. 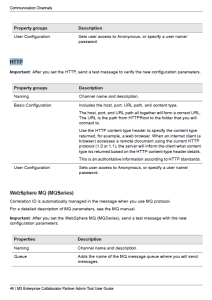 By reading the partially recovered Java source code of class HTTPOut in package com.intentia.ec.communication we determine it is indeed an HTTP client (not a server, and not a response like the word out in HTTPSyncOut suggests). It uses a java.net.HttpURLConnection to make the request to the server defined in PartnerAdmin with host, port number and path. 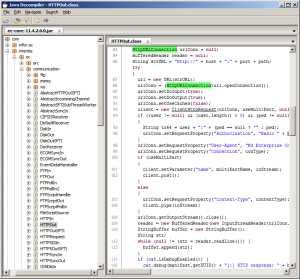 Unfortunately, there are some drawbacks. The scheme is hard-coded to “http” so there is no HTTP-Secure possible; whereas it is possible with javax.net.ssl.HttpsURLConnection; although there is an HTTPSOut channel provided in the sample chapters of the documentation. The user and password transit in clear text (trivial Base64-decode). It is a departure from the benefits of Java NIO; see part 1 of the guide. The response is ignored (at best it is logged in the debug files) so I do not think there is a possibility for MEC to process the response. And it does not have support for a proxy.

Here is a simple activity diagram of the HTTPOut channel:

Again, the word pair in/out does not reflect the word pairs client/server and request/response, and that can cause confusion.

To setup an HTTPOut channel in MEC:

To test the new HTTPOut channel:

2015-03-31: I removed my incorrect note about the boundary as in fact there is a random string appended to the boundary.